Firehouse is proud to present the findings from our 2019 State of the Fire Service survey. 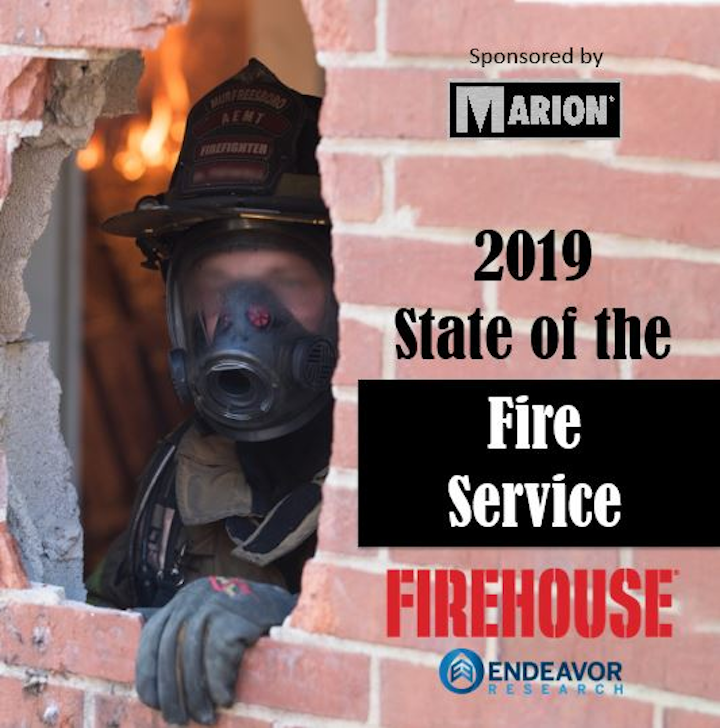 Concerns about job-related cancer, fire service peer support and a desire to see more funding so fire departments can increase their response capabilities are just a few of the takeaways from Firehouse's 2019 State of the Fire Service survey.

In August 2019, Firehouse and Endeavor Research invited emergency response professionals to participate in an annual study by completing an online survey, with nearly 750 of them offering their feedback during a roughly one-month period this past Summer. The data in the report are entirely self-reported and will assist us in understanding more about the current condition of the fire service.

The results come from a wide range of perspectives given that among respondents there was a close split between those in career (35.9%) and volunteer (32.4%) departments, as well as a sizable representation for combination departments at 24.1 percent. 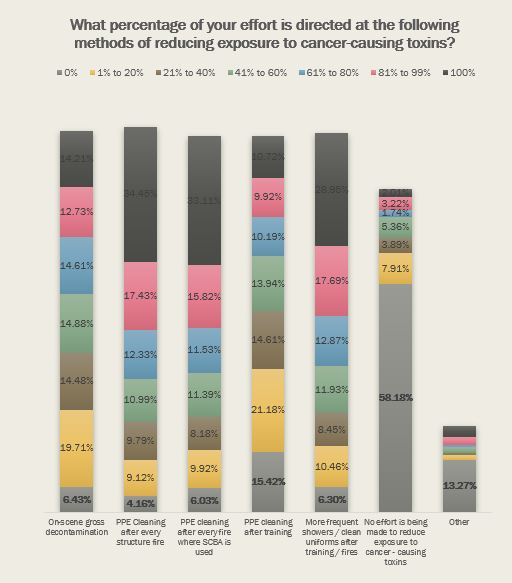 This graph shows the breakdown of where firefighters are concentrating their efforts on reducing their risk of developing cancer.

Several questions focused on safety, health and wellness aspects of the fire service, and one of the most crucial among them was about the level of concern respondents had for developing some form of job-related cancer. The vast majority of respondents—nearly 90 percent—said they were concerned about the threat and are actively taking some type of precaution to avert it. Of that large group, 41 percent said they were taking "all possible precautions."

Mental health was another topic touched on in a few questions, and over three-fifths (62.2%) of respondents indicated they were happy mentally. Close to nine percent of those surveyed indicated to either thinking about or attempting suicide/self-harm or receiving guidance that was not helpful. Respondents also indicated a 79.5 percent tendency toward preferring a friend in the fire service to talk to about these issues as opposed to department-provided counseling.

One of the deepest probes into a topic involved training, touching on elements such as prioritization, frequency and depth. Naturally, fireground tactics were found to be a leading training priority for respondents at nearly 85 percent, with a majority of that group making it their top priority (58.9%).

Amid a national volunteer shortage and with spending cuts happening almost everywhere, close to half of the respondents (49.5%) agree that their department would be able to improve response capabilities with additional funding. Close to 74 percent rated this an 8 or higher on a scale of 1 to 10. 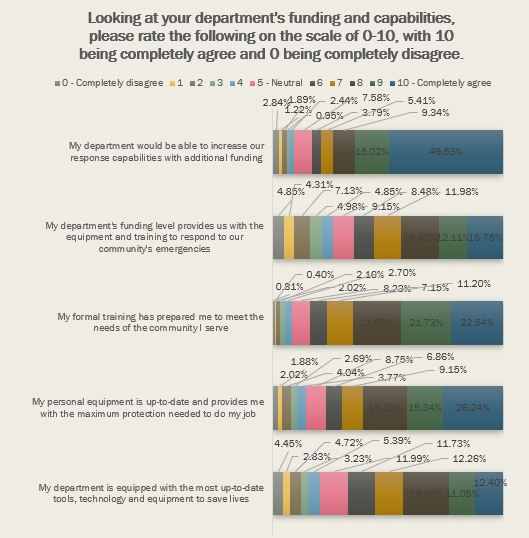 And if you feel like you spend a portion of your own income on the fire service, you aren't alone given that a vast majority of respondents (91.1%) indicated that they do the same. The largest group were chief officers, while those who said they spent the least were paramedics, EMTs and EMS Supervisors. Items that comprise the bulk of industry expenses include tools, education, professional development, uniforms and clothing, PPE and hands-on training.

Among the more overarching questions asked within the survey was one that rated the morale of a fire department compared to a year ago. More than three-fifths (61.8%) of respondents rated the morale of their department at a six or above on a scale of 1 to 10, while just under 12 percent offered a rating of nine or higher. Overall, morale was rated at a net positive of nearly 41 percent.

More than half of the respondents (56.6%) said that they saw leadership as having the biggest impact on fire department morale, with training (27.5%) and guidance (25.7%) ranking second and third in the category. Overtime was overwhelmingly seen as having the least impact in morale at 36.3 percent.