The mural in Baltimore's Boyd-Booth neighborhood was developed with the artist and the children of Racheal Wilson, a firefighter who died nearly 12 years ago. 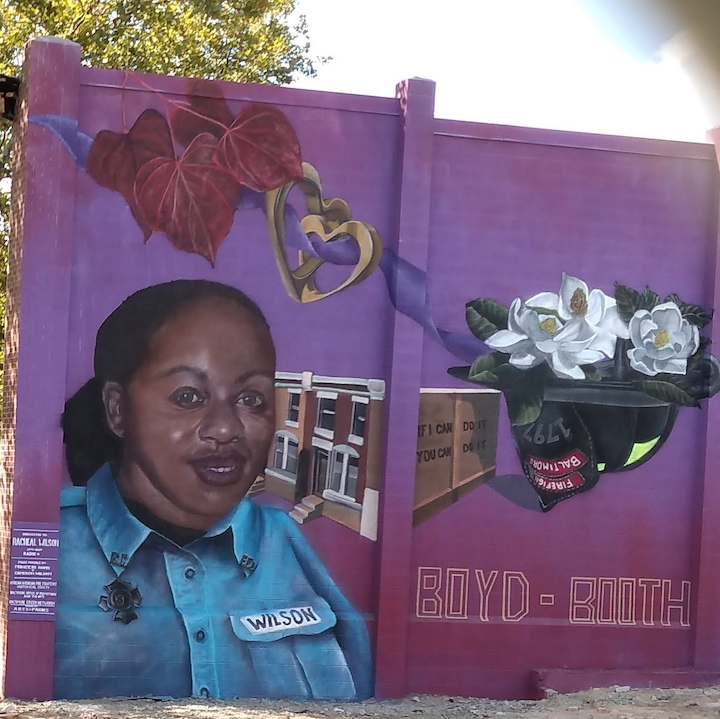 A new mural honors the memory of Baltimore firefighter Racheal Wilson, who died nearly 12 years ago.
Baltimore Office of Sustainability

A new mural in the Boyd-Booth neighborhood of Southwest Baltimore honors the memory of Racheal Wilson, a firefighter who died there nearly 12 years ago.

According to a press release that the city government emailed Thursday afternoon, noted local artist Nether developed the mural in tandem with the late Wilson’s children, Princess Davis and Cameron Richardson. The mural shows Wilson in uniform and features several magnolia flowers, which Nether said was a nod to her family’s Southern American roots (as magnolias are found throughout the region), as well as a series of rowhouses and the neighborhood’s name.

Both Nether and Kimberly Knox of the city’s department of planning said that the mural initially came about because of interest from Wilson’s family, The Concerned Citizens of Boyd-Booth neighborhood association and the African American Fire Fighters Historical Society. Wilson died of asphyxiation and burns during a training exercise in the neighborhood in 2007.

Nether developed the mural with Wilson’s children over the summer and painted it in October. It occupies a northern wall along the edge of a memorial park that also bears her name at 145 S. Calverton Rd. The mural was funded by the Baltimore Office of Promotion & the Arts, Knox said.

Wilson’s death led to the family suing the city. Both parties reached a settlement of $200,000, according to publicly available documents, in 2013.

The family, city and neighborhood groups involved will formally present the mural at a ribbon-cutting ceremony on December 2 at 11 a.m.