Worcester firefighter Christopher Roy was posthumously given the Medal of Honor at the state's annual Firefighter of the Year Awards Ceremony. 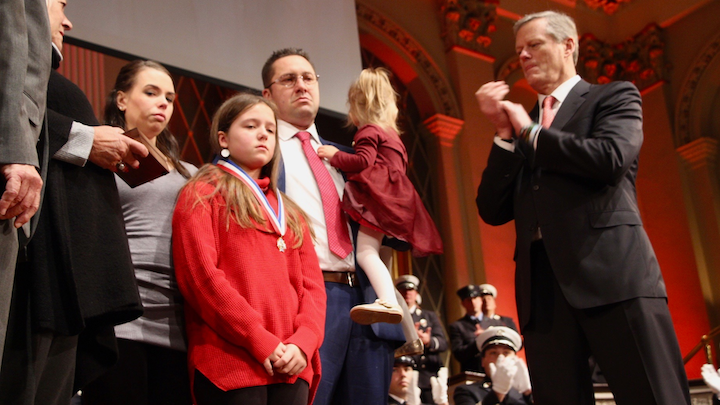 Firefighters from across Massachusetts were honored during the Firefighter of the Year awards at Worcester's Mechanics Hall on Tuesday. A posthumous Medal of Honor was awarded to fallen Worcester firefighter Christopher Roy and accepted by his 10-year-old daughter, Ava.
Aviva Luttrell | MassLive

Almost a year after Worcester firefighter Christopher Roy was killed while responding to a late-night basement fire on Lowell Street, Gov. Charlie Baker and state officials presented his family with a posthumous Medal of Honor on Tuesday at the 30th annual Firefighter of the Year Awards Ceremony in Worcester.

Roy, 36, was a 2 1/2 year veteran of the department. His 10-year-old daughter Ava wore the medal around her neck in his honor.

“This is a very high stakes game in its most compelling moments, and today is all about appreciating and recognizing just how high the stakes can be,” Baker said.

The ceremony comes only two weeks after Worcester Fire Lt. Jason Menard, 39, died while responding to an overnight blaze at a home on Stockholm Street. No one in the house was injured and two firefighters were saved by Menard before he was killed.

In addition to Roy, Baker recognized Menard’s heroic sacrifice as well, noting that he and the Lt. Governor visited one of the firefighters Menard had saved, Chris Pace, in the hospital last week.

“If Jason Menard hadn’t thrown him out that third-story window, we would have lost two firefighters instead of one,” Baker said. “The people who sign up to join the fire service, the EMTs, the police departments, the first responders, they don’t do it for ceremonies like this. They do it because they believe in it.”

Firefighters from across the state were also recognized for their bravery in 2018 with Medals of Valor and Citations for Meritorious Conduct, including the firefighters in Lawrence, Andover and North Andover who responded to the Merrimack Valley gas explosions last September, which caused dozens of fires and displaced thousands from their homes.

Another Worcester firefighter, Lea Caldwell, was among the Medal of Valor recipients, for helping three people escape a fire at an eight-unit apartment building last year.

“I know this chance, to come together once a year to say God bless and thank you for your willingness to step up in the most dangerous and darkest moments of people’s lives, is something that should be recognized with honor,” Baker said.

Visit the Boston Herald at www.bostonherald.com