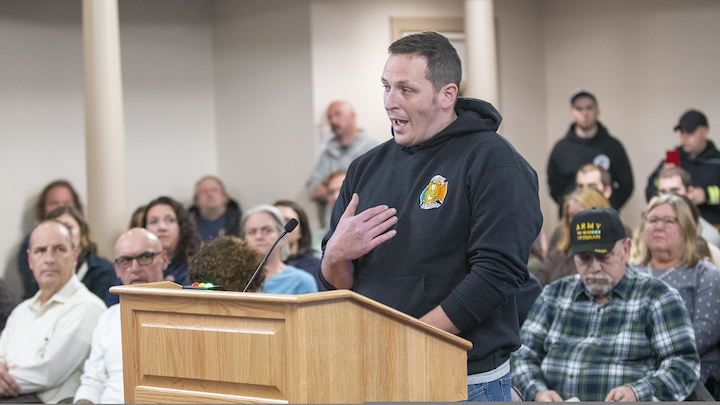 MIDDLETOWN, RI—More than 125 people packed the Town Council chamber of Town Hall Monday night and spilled out into the hallway, most of them there to protest alleged understaffing of the Fire Department.

Boiani is a town resident and director of nursing at the John Clarke Nursing and Rehabilitation Center.

"We're scared," resident Michael Lopes told the council in a loud voice. "We can get injured, die, lose our home, lose our car if we don't get the fire assistance we need. We spent millions of dollars on a new fire station and fire trucks, but we don't have the people to staff them."

Comments like these generated loud applause from the audience.

Council President Robert Sylvia told the audience that council rules allow for 15 minutes of public comment, with each speaker limited to up to five minutes. Each of the speakers began calling for more town firefighters to be hired and less reliance on neighboring communities for mutual aid. When time expired, the audience loudly called for more time and Sylvia allowed an additional five minutes of public comment.

The catalyst for the big turnout and public anger was the New Year's Eve fire in a Woolsey Road home that resulted in three people being transported to hospitals and heavy damage to the home. A Newport Fire Department fire engine was the first fire apparatus on the scene to begin fighting the fire because the staffed Middletown engine was tied up on a medical call.

"The staffing levels in the Middletown Fire Department have not changed in 30 years while the number of emergencies, accidents and other incidents have tripled since then," Boiani told the council.

"As a director of nursing, I can tell you that our response time has become longer and we never know what department is going to show up," she said.

Each shift in Middletown has five firefighters, a shift captain and civilian dispatcher, but since one firefighter is often off because of vacation, sick time, etc., the shifts typically have four firefighters on duty with a captain on each shift. That is the smallest shift size of the three communities on Aquidneck Island.

"One Emergency Medical Services call and the entire department is not available to respond to other calls or emergencies," Boiani said. "Therefore, MFD relies on mutual aid from surrounding communities to meet the needs of the Middletown area."

"The delayed response time and the utilization of mutual aid directly impacts someone possibly living or dying," she added.

Tom Welch, a Mitchell's Lane resident, told the council he is a retired Newport fire captain with 25 years of experience. He said the town's population is aging and people can stay in their homes longer because of various programs. That means more rescue calls although the town's population has declined by about 1,000 people over the past 20 years, he said.

"The days of scooping up the patient and dropping them off at the emergency room are long gone," Welch said. "As an example, the cardiac arrest protocol requires on-scene interventions and treatments that take a minimum of 30 minutes. This does not include dispatch and transport times, or all the time it takes to restock and repack all the medications used or to disinfect the equipment including personnel and the rescue vehicle."

The firefighter patient care protocols are dictated by the state Department of Health, he said, but they add greatly to the time it takes for firefighters to be available for the next call.

"You cannot safely and responsibly operate a municipal fire department reliant on mutual aid and assume it will always be adequately available, yet that is exactly what we are doing here," said Welch.

"The recent house fire was an unfortunate warning of situations to come," he said. "I am here tonight as your constituent, telling you I do not feel adequately protected."

"Ensuring we have enough firefighters and police officers is our highest priority," Council President Sylvia told the crowd. "We review the staffing on a yearly basis."

The union is requesting an increase of 25% more firefighters, Sylvia said.

"Even that would not eliminate mutual aid," he said.

"It would help reduce response times," someone from the audience yelled.

Sylvia said the town and the union, Middletown Firefighters Local 1933, are in arbitration and staffing is an issue.

"We will continue to review the matter without press releases or social media comments," Sylvia said.

Town Administrator Shawn Brown said the response to the Woolsey Road fire was being investigated.

"Our fire chief and captain were the first on the scene," Brown said. "Our pumper and a transport vehicle were one minute from the fire scene, but they were not contacted by dispatch."

At the time, the Middletown fire truck, rescue wagon and a police officer were on their way to Newport Hospital as part of a medical call that was not an emergency, Brown said.

"These are matters that need to be investigated," he said.

Sylvia closed this part of the council meeting by allowing Joseph Andriole, president and business agent for the Rhode Island State Association of Firefighters, to respond briefly to the council's and Brown's comments.

"In 2006, the Middletown fire chief said in a report the department was grossly understaffed," Andriole said.

He said there have been no negotiations between the union and town in recent months because the town refused to meet. Instead, the parties are in arbitration, he said.

"You will spend double the money on attorneys and arbitration than you would to provide more public safety," Andriole said, objecting that he was not allowed to speak more than two minutes.

"I'll go because this is your show," he told Sylvia.