"It's very challenging to replace," said acting Framingham Fire Chief Michael Dutcher after the recent retirements of four firefighters with a combined 127 years of experience. 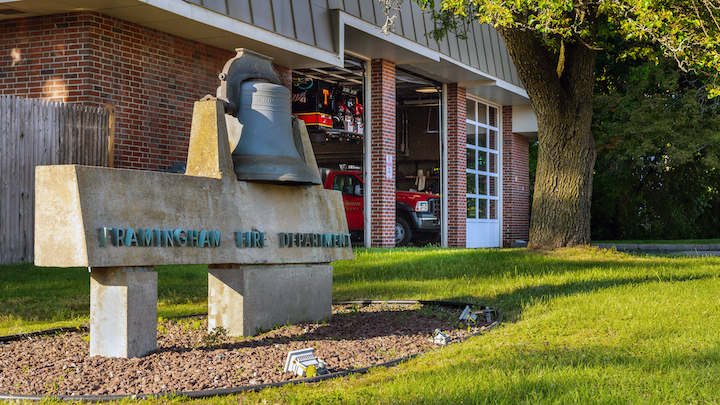 FRAMINGHAM, MA—When 127 years of experience in any organization walks out the door at once, it's going to be noticed. A recent case in point is the Framingham Fire Department, which saw four veteran jakes retire.

But it's not unusual to have so many retirements occur at one time, said Dutcher, who is acting chief because Fire Chief Joseph Hicks is out on family medical leave.

"It happens occasionally," Dutcher said. "We hire five or six new firefighters at a time, so they end up with the same amount of time on the job and usually retire around the same time."

Needham Fire Chief Dennis Condon, president of the Fire Chiefs Association of Massachusetts, said many departments have similar experiences with retirements. He said he believes it started after World War II, when veterans returned home and were hired as firefighters at the same time. They then retired at the same time, resulting in a large amount of hires to replace those who retire.

"In our department, we're getting to the tail end of that," said Condon. "In the past year, we've hired 17 new firefighters. We're at the point where we're about to catch up."

Milford Fire Chief William Touhey Jr. said that when he came on the job in the mid-1980s, he and other new firefighters replaced many Korean and Vietnam War veterans. The Milford Fire Department, which has 40 firefighters, expects to lose two to three firefighters this year to retirement.

"We all come in in clumps, and we all retire in clumps," said Touhey. "It's not unusual."

In Framingham, the department is now on the younger side, Dutcher said. Of the city's 140 firefighters, 60 have fewer than five years of experience. The department will be looking to hire eight more firefighters this year to max out its staffing at 148. Despite that, Dutcher said residents should not be concerned about a lack of quality.

"We have a very robust training division," he said. "Our training officers and command officers work every day to make sure everyone is ready. The training division's motto, and we borrowed it from the (New England) Patriots, is 'No days off.'"

"You have a lot of guys coming in with no experience," he said. "They're properly trained – they've gone through the academy – but this job is all about experience. They can look at the situation and know how to mitigate it due to their job experience."

Nevertheless, it can be advantageous to get a group of new firefighters in at the same time, Condon said.

"It's a double-edged sword," he said. "You lose a lot of people who know the town, the people and what to do and when to do it. But on the other side, you get a new look, a new cultural look within the department, people who are looking at the job a little more enthusiastically, because it's new to them."

Dutcher had nothing but praise for the four firefighters who retired. He noted that Pruyn was the first female firefighter hired in Framingham.

"We have two other women on the job currently, and she (Pruyn) really helped pave the way for them," said Dutcher. "She had to work through the '80s and '90s within a male-dominated profession, and she excelled. It shows a lot about her character."

Connolly has been serving as the command officer of the day shift and worked as a liaison between the firefighters and the administration, Dutcher said.

"He saw a lot and did a lot," said Dutcher. "Personally, when I came on the job, he was one of my very first lieutenants. I've always had a great relationship with him."

Dutcher said he and King did not always see eye to eye, but he said they always worked it out to make the right decision when it mattered.

"Jimmy's one of the best firefighters I've ever worked with," said Dutcher. "Even though we didn't always agree, I consider him a friend."

Mazzola, who got his start in Watertown, worked his way up from working on the rescue truck to becoming the assistant fire marshal in the last few years.

The retirements have resulted in a number of promotions, the acting chief said. Jim Ahearn has been promoted from captain to deputy chief. Jose Rubio moves from lieutenant to captain. New lieutenants include James Kellett, Trevor O'Leary and Chad Sexton. Sexton's brother, Joel, is also a lieutenant, Dutcher said.