Neighbors told firefighters a squatter lived in a vacant Springfield home, but they were unable to rescue him because of advanced fire conditions. 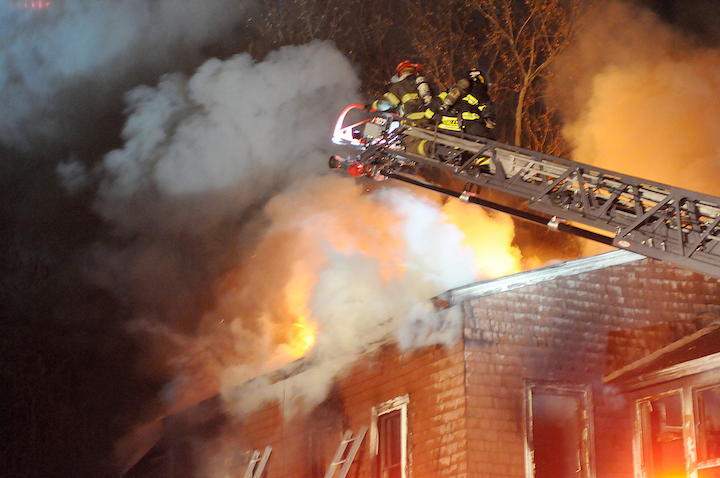 Firefighters began searching the home for a squatter who was reported to live inside, but were forced out by advanced fire conditions.
Dave Canton/MassLive.com

Fire officials are continuing their investigation into a two-alarm fire that took the life of an apparently homeless person Friday night.

Springfield Fire Department spokesman, Capt. Brian Tetreault confirmed that firefighters found the remains of a male individual in the first-floor rubble of 125 Yale St. after fire destroyed the unoccupied house.

Firefighters were called to the scene just after 9 p.m. and found the boarded-up house heavily involved in flames. Fire personnel had to rip sheets of plywood covering windows and doorways to fight the fire within the two-story, wood-framed building.

Fire scene commanders learned from neighbors that a possible squatter had been seen around the house and firefighters began an initial interior search. Soon after, however, officials had to call the searchers out of the building due to intense fire. A second alarm was called in about 45 minutes after the first units arrived as flames broke through the roof of the house.

It wasn’t until about 10:45 p.m. that firefighters were able to resume the search and the remains were found.

Investigators from the Springfield Arson and Bomb Squad, Springfield Detective Unit, and the State Fire Marshal’s Office are continuing to search for the cause of the blaze.

The Office of the Chief Medical Examiner has taken custody of the remains to identify the victim, Tetreault said.