A firefighter was treated for a sprained ankle as crews battled the blaze that spread through the unoccupied Meridia Downtown complex in Bound Brook late Sunday. 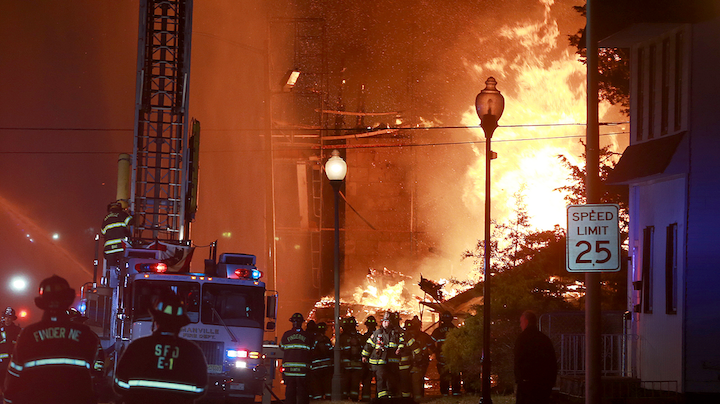 The seven-alarm fire that decimated a pair of apartment buildings under construction in downtown Bound Brook Sunday night came dangerously close to spreading to nearby homes and will likely be under investigation for months, officials said Monday as firefighters continued to douse the smoldering wreckage.

The blaze could take weeks or months for a cause to be determined, said Mayor Robert P. Fazen. The builders of the properties are sending crews to demolish what remains the structures, the mayor said.

About 100 to 200 people in the area were evacuated from their homes. Power was cut to most of downtown, but should be back sometime Monday, Fazen said.

Kyliah Lynch, 21, was watching a movie in her Church Street home in the neighborhood threatened by the blaze when her sister began hearing the fire trucks and then saw the fire.

“It was so close we felt the heat. I just wanted to get away, I just wanted to be safe,” Lynch told NJ Advance Media on Monday. Her family took their dog, her sister’s 6-month-old baby and escaped to end of Church Street. They spent the night at her sister’s house and still don’t have power Monday.

“It just makes you love your family even more,” said Lynch’s mother, Wanda Barnett, 53. “It’s scary to see. It could’ve been worse. God is good.”

The fire broke out shortly before 8 p.m. on East Main Street near Mountain Avenue. Roaring flames spread to both sides of the street in the borough’s downtown commercial district near the NJ Transit train station.

The fire destroyed an unoccupied complex known as Meridia Downtown before spreading rapidly.

In addition to the construction sites, Bound Brook Police Chief Vito Bet said the fire spread to two houses and an electronics store.

But a quick response from fire departments in Somerset, Union and Middlesex counties spared homes – and potentially lives, officials said.

There was no one inside any of the affected structures when the blaze began. One firefighter suffered a sprained ankle, but no other injuries were reported, officials said.

Fazen said at least 100 firefighters from about 20 agencies responded.

“Every town in the area sent trucks,” Fazen said. “Some trucks couldn’t even reach the scene because traffic was a disaster.”

The mayor said at one point there were five hoses spraying onto one building. By morning, things had quieted as the fires were declared out, but firefighters continued to pour water on hotspots.

Developers began construction on the apartment buildings about six months ago. Both complexes hoped to begin leasing apartments or retail space in the fall, the mayor said.

The mayor described Bound Brook as having a “history spotted by fires” and cited disasters including the Hurricane Floyd flood of 1999.

“Going through that will help us recover,” he said. “We are used to disasters, we’ll rebuild, it’s just a matter of time."

The mayor said assistance from the New Jersey Red Cross was not necessary because there was no one living in any of the units.

Officials also disputed reports that there were homeless people squatting in the building that caught fire, saying it was “improbable.”

Gullia compared Sunday night’s fire to a large blaze behind ShopRite in Bound Brook that firefighters fought in 2010.