The 6.4-magnitude earthquake, the country’s strongest in decades, brought down buildings, and rescue workers are searching the rubble for missing persons. 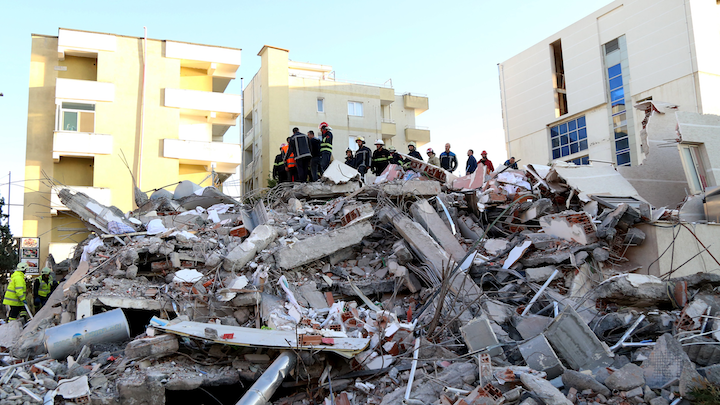 Emergency workers look for survivors trough the rubble of a damaged building in the coastal city of Durres, west of capital Tirana, after an earthquake hit Albania on Tuesday.
Gent Shkullaku/AFP via Getty Images/TNS

BELGRADE, SERBIA—At least 20 people have been confirmed dead following a powerful earthquake in Albania, which brought down buildings in the capital Tirana and the port city of Durres.

Many people were still feared to be trapped under the rubble following the 6.4-magnitude earthquake, reported to be the country’s strongest in decades. The earth was felt shaking as far as northwest Greece, southern Serbia and in parts of southern Italy.

Police have deployed 1,900 officers in the search for missing persons.

There were 12 confirmed deaths in the port city of Durres, where several buildings collapsed, among them an 18-floor skyscraper and two hotels.

Five bodies have been recovered so far in the smaller town of Thumana, just to the north of Durres. One person was killed in Kurbin after jumping from a high balcony in panic.

Rescue teams pulled 43 survivors from the rubble in the area, some of them children, Klan reported. Injuries have been reported as far away as Shkodra, near the border with Montenegro.

“The powerful earthquake which hit has caused serious consequences, and unfortunately we have lost lives,” Prime Minister Edi Rama said.

“All structures of the state were put in place from the very first moments after the earthquake … and are working intensely to save every possible life in Durres and Thumana,” Rama tweeted.

Fabio Hasani, a resident of the nearby capital of Tirana, said the tremor triggered panic when it struck at around 4 a.m., with many people running into the street and remaining there for about an hour.

“I woke up confused, feeling my bed moving. Then I realized that everything was moving and shaking, the walls were creaking,” Hasani told dpa. “It shook for around a minute.”

The 6.4-magnitude earthquake was the strongest in three decades, local media reports said.

The epicenter was about 6 miles deep and just north of Durres, about 15 miles west of Tirana, according to the U.S. Geological Survey.

Another major tremor, of magnitude 5.4, struck south-western Bosnia, near the border with Croatia and its historic city of Dubrovnik at around 10 am. Two people were reported injured in Mostar.

The ground in the region had not yet settled by late afternoon, as two more significant earthquakes, each of magnitude 3.0, hit near Durres around 4 pm.

Overall, the European-Mediterranean Seismological Centre reported more than 40 tremors, with epicenters under Albania, the Adriatic and in Bosnia.

Some damage was reported in southern Montenegro and south-western Bosnia, and tremors were felt across the Adriatic, in Italy, and throughout the Balkans.

The European Union and countries in the region offered condolences and assistance to Albania, a prospective EU member and part of NATO.

“We express our deep condolences to the people and the authorities of the country,” EU foreign affairs spokeswoman Maja Kocijancic said.

The EU was to deploy a civil protection team to help the authorities coordinate the response and assess the damage.

Prime Minister Giuseppe Conte of Italy, a quake-prone country with close historical ties to Albania, tweeted that firefighters, the Civil Protection Agency and Red Cross officials were on their way.

“Several vehicles and more than 200 men have already left for Albania,” including special teams with sniffer dogs, the Civil Protection Agency said separately.

The region was also hit in late September by a magnitude-5.8 tremor, which struck about 35 miles northwest of Tirana, injuring dozens. 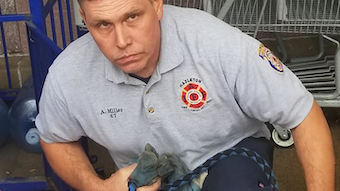 Hazelton firefighters used bolt cutters to cut open the lock on the metal receptacle and were treated to wet kisses from the gray and white female canine they freed within a minute of arriving.
Oct 8th, 2019 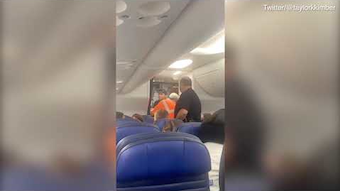 The United Airlines passenger became trapped inside the bathroom when the door became inoperative, and the San Francisco-bound flight was diverted to Denver.
Sep 26th, 2019 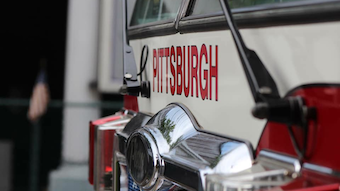 The man suffered minor injuries when he was stuck in the back of a garbage truck after he fell asleep inside a dumpster in Pittsburgh's Carrick neighborhood.
Sep 9th, 2019 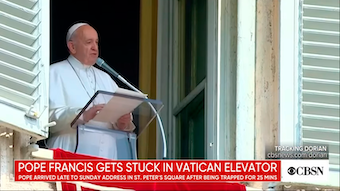 The 82-year-old pope is known for being very punctual, prompting people in St. Peter's Square to glance nervously at their watches when he did not show up for prayers.
Sep 1st, 2019 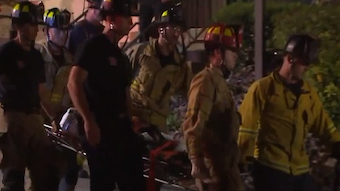 San Diego firefighters needed more than an hour to pull out the woman who fell into a narrow crevice between walls outside an apartment complex Wednesday night.
Aug 22nd, 2019 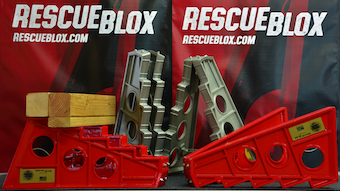 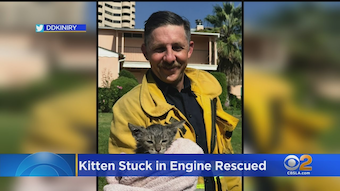 Firefighters took about ten minutes to free the kitten -- which decided to take a nap in the most precarious place.
Aug 3rd, 2019 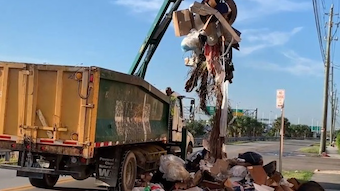 Hialeah firefighters used high-tech gear and even dug through smelly piles and bags of trash after a worker heard a strange noise coming from the back of the truck.
Jul 26th, 2019 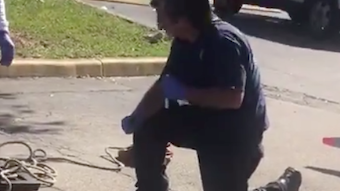 Raw video captures a Lauderhill firefighter facing the wrath of a protective mother duck as he pulls out her four babies that were trapped in a drain.
Jul 24th, 2019

The contractor, who was uninjured, was trapped in a trench for about 90 minutes while Reedy Creek firefighters worked to free him.
Jul 11th, 2019

The girl had become trapped in a two-story apartment complex's chimney, and Los Angeles County firefighters had to remove bricks to safely reach her.
Jun 6th, 2019

Ross Township firefighters rescued a 70-year-old farmer who was stuck in a grain silo and beginning to suffocate Thursday afternoon.
Jun 1st, 2019

It is the first Checkmate product to be launched in North America.
Pure Safety Group
Apr 30th, 2019