Gus Maynard reminds us of how two decades ago, the Worcester, MA, Fire Department lost the lives of six firefighters in a spectacular blaze. 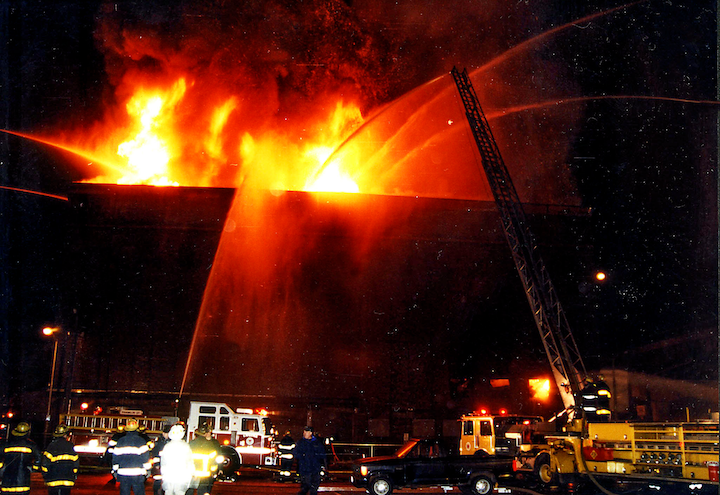 The initial response was Worcester Fire Department (WFD) Engines 1, 6, 12 and 13, Ladders 1 and 5, Rescue 1 and Car 3. Upon arrival at 6:16 p.m., Engine 1’s officer reported heavy smoke coming from the roof. Companies entered and started searching for the fire. At 6:19 p.m., Car 3 arrived and ordered a second alarm, bringing two more engines and one more ladder. Crews in the building discovered heavy fire in the elevator shaft and called for lines to be deployed. A report came in: Two homeless individuals were inside. Rescue 1 split into two-person teams and started a search of the building. Conditions deteriorated; visibility went to zero. One of the two-person teams became disoriented on an upper floor; other crews started searching for them. The missing team called command: They were running low on air and needed immediate assistance.

As crews searched, conditions worsened. Two more two-person crews lost their bearings. While the search continued, one officer reported that the building’s integrity was starting to fail. Several attempts were made to radio the missing firefighters; there was no answer. At 8:00 p.m., all companies in the building were ordered out by the incident commander (IC) for a defensive attack.

For the next eight days, crews worked around the clock to locate the bodies of the six firefighters who were lost. They are: 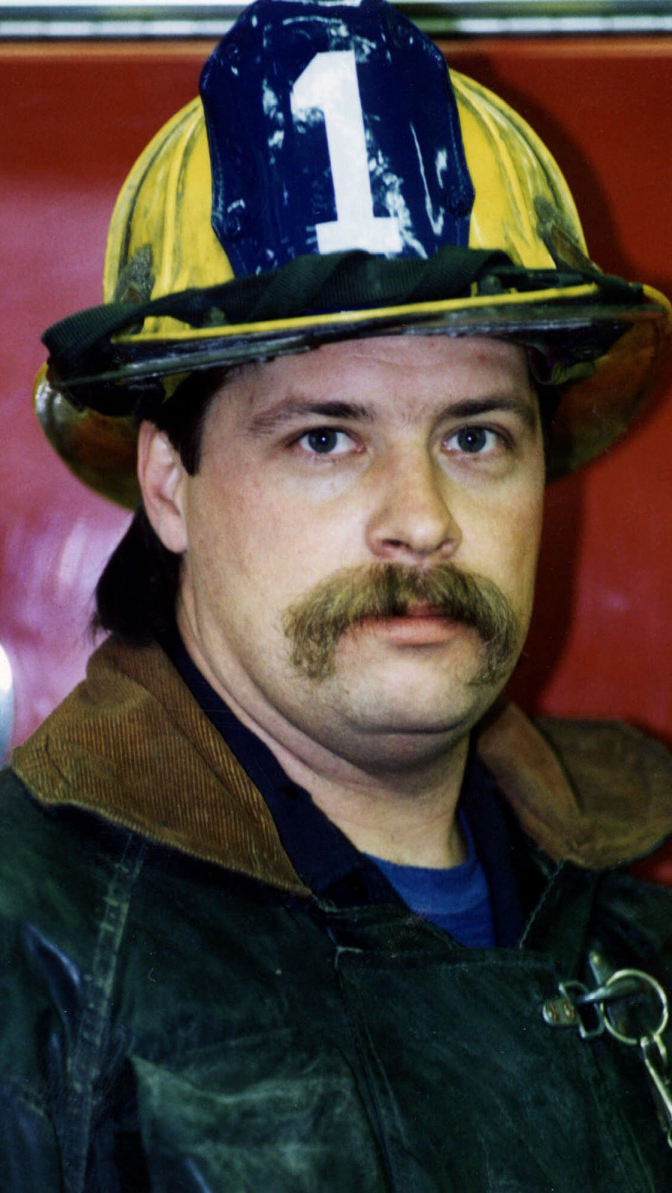 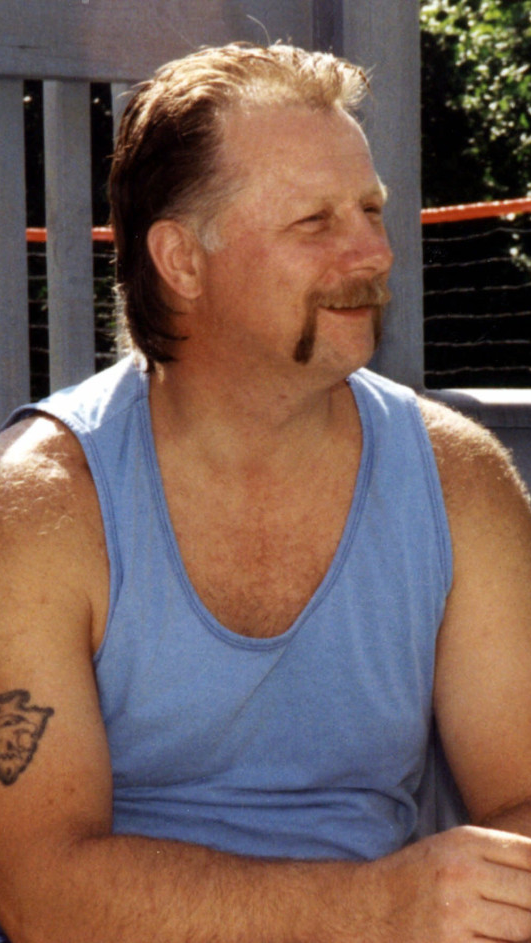 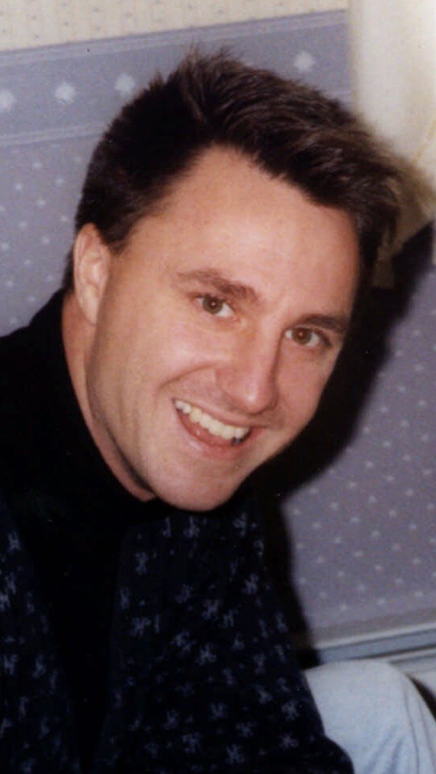 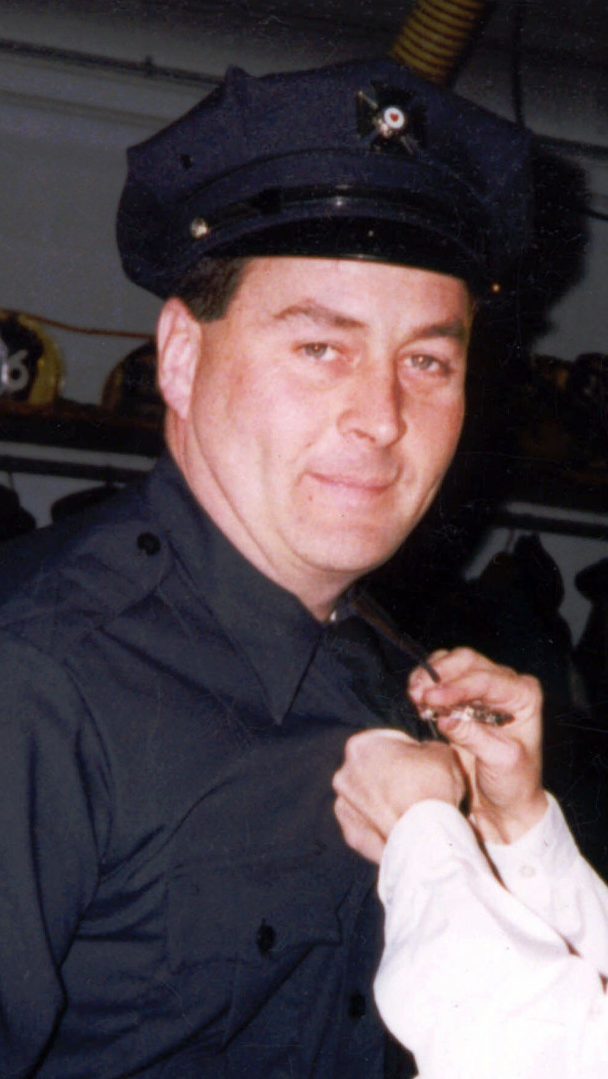 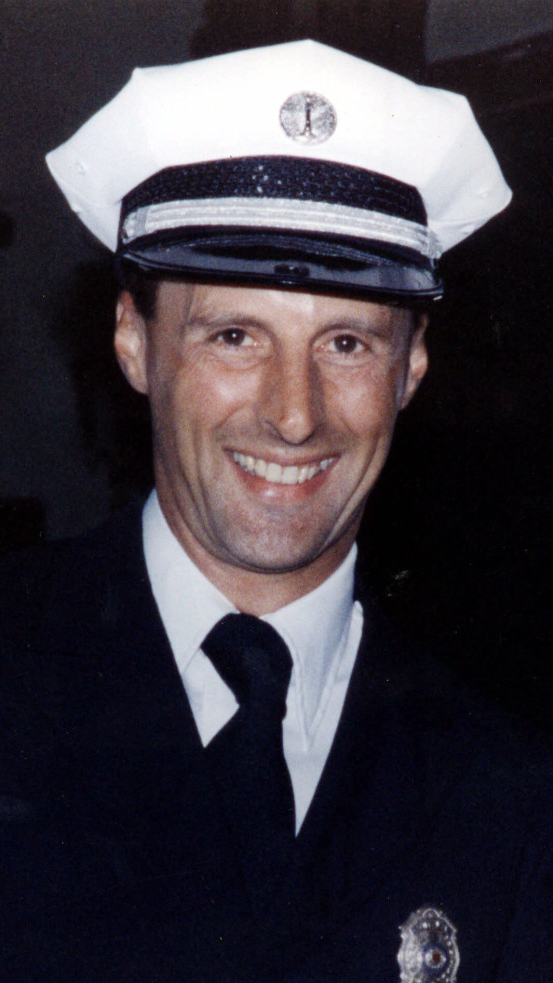 Tom SpencerIt was determined that the homeless people left the building as much as an hour before the fire was reported. The fire was believed to be caused by a fallen 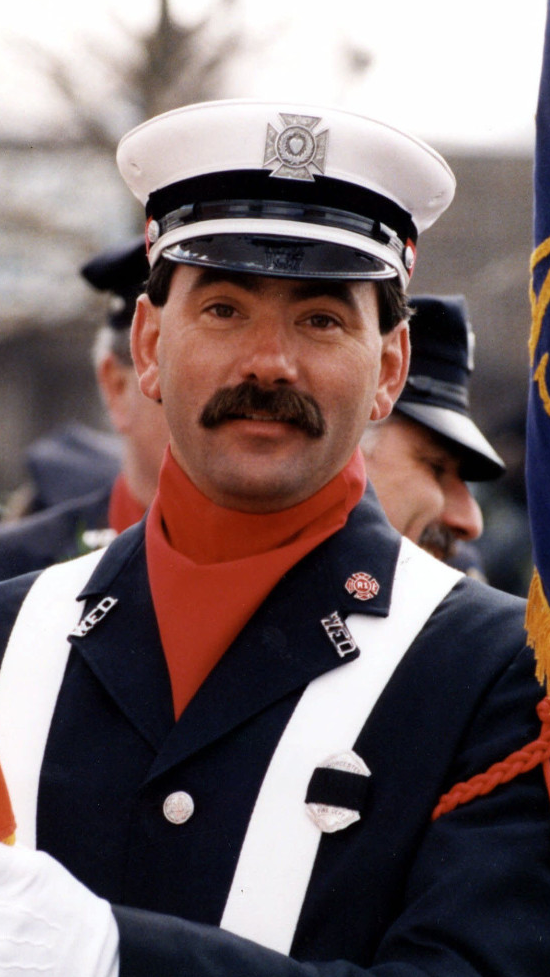 After the National Institute for Occupational Safety and Health’s (NIOSH) lengthy investigation, the agency’s firefighter fatality review made 13 recommendations. Here is how WFD has responded to those:

Recommendation #1: Fire departments should ensure that inspections of vacant buildings and pre-fire planning are conducted and that they cover all potential hazards, structural building materials and renovations that might be encountered during a fire. The IC would have necessary structural information to make informed decisions and to implement an appropriate plan of attack.

Recommendation #2: Fire departments should ensure that the incident command system (ICS) is fully implemented at the fire scene.

Response: WFD trains all personnel in the ICS and uses the ICS for every incident.

Recommendation #3: Fire departments should ensure that a separate, independent Incident Safety Officer is appointed when activities, size of fire or need occurs, such as multiple-alarm fires, or responds automatically to pre-designated fires.

Response: WFD created a full-time safety officer position to respond to larger-scale incidents. A new Safety Division has a district chief as a division head; a captain is assigned to each working group.

Recommendation #4: Fire departments should ensure that standard operating procedures (SOPs) and equipment are adequate and sufficient to support the volume of radio traffic at multiple-alarm fires.

Response: A portable radio is available for every position on the apparatus.

Recommendation #5: Fire departments should ensure that the IC maintains close accountability for all fire-scene personnel.

Recommendation #6: Fire departments should use guide ropes/tag lines that are securely attached to permanent objects at entry portals and should place high-intensity floodlights at entry portals to assist lost or disoriented firefighters for emergency escape.

Response: Each SCBA has a search rope bag that’s attached to it.

Response: A RIT is at every reported fire.

Recommendation #8: An overall health and safety program should be implemented.

Response: The Safety Division is responsible for WFD’s Health and Safety Program.

Response: WFD is evaluating plans to deal with the marking of rooms during searches.

Recommendation #10: Fire departments should identify dangerous vacant buildings by affixing warning placards to doorways, etc., through which firefighters might enter.

Recommendation #12: Fire departments should explore the use of thermal-imaging cameras to locate lost or downed firefighters and civilians in fire environments. 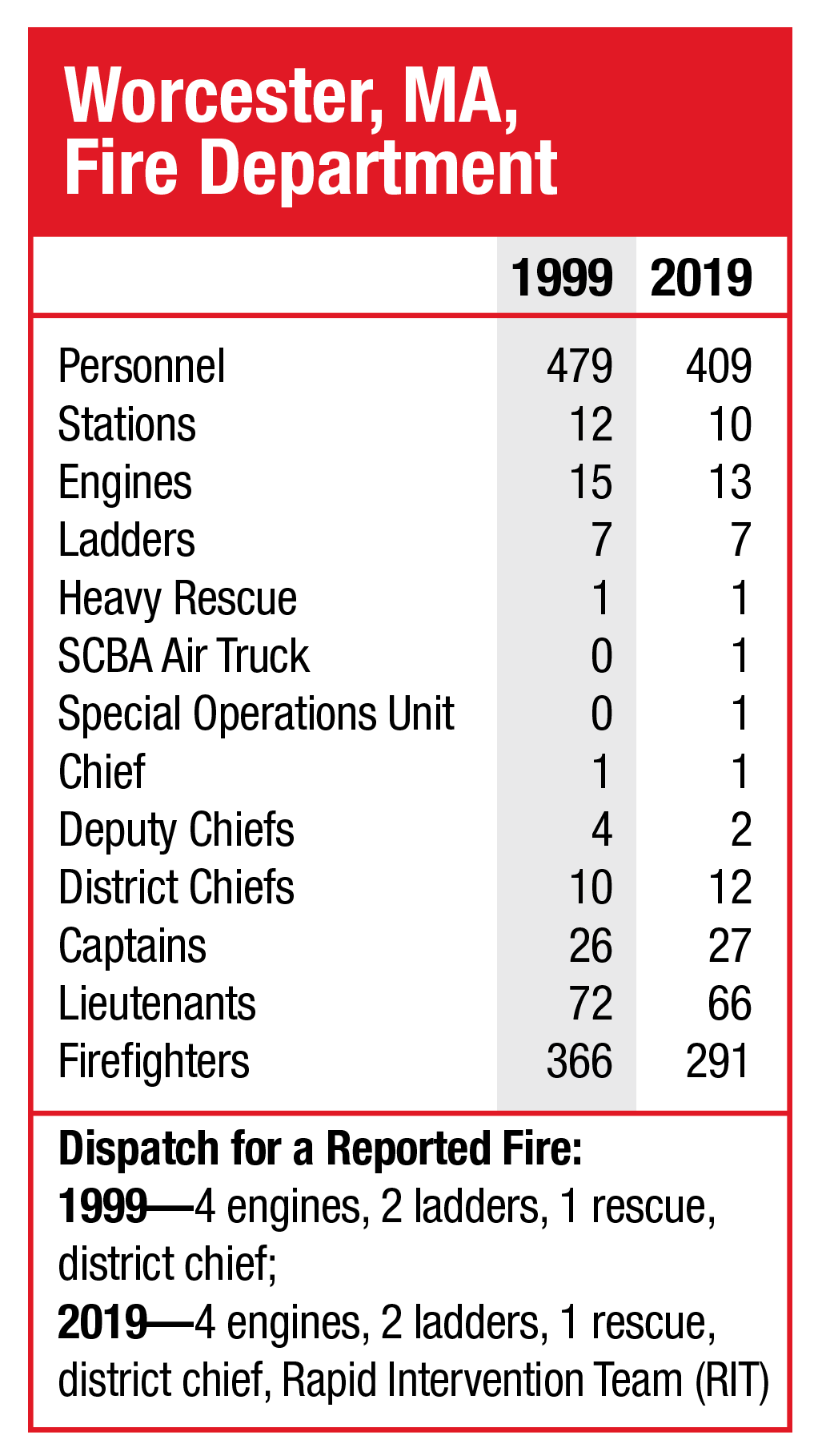 A look at how the Worcester, MA, Fire Department has changed.

Recommendation #13: Manufacturers and research organizations should conduct research into refining existing and developing new technology to track the movement of firefighters who are on the fireground.

Response: WFD now has personnel-tracking capabilities on all SCBA.

New training is focused on key areas, including RIT and firefighter self-awareness and self-rescue. WFD secured buildings to conduct scenarios and smoke machines to recreate real-life incidents and to perform actual rescues of down or lost firefighters.

A mandatory monthly in-service training is set for all companies. Officer training focuses on tactics and strategies. The department continues work on RIT capabilities as better techniques are developed.

The division also is tasked with taking steps toward the prevention of cancer. It mandated the issuing of two sets of gear to all personnel and the installation of extractors in stations, so personnel can clean their gear after an incident. Air is monitored during overhaul. Fire scenes are evaluated on an ongoing basis to identify problems that might arise as time passes.

The division is developing a program that will permit crews to perform gross decontamination at the scene, with particular focus on the head and neck.

The division inspects all PPE and investigates all fireground injuries and all apparatus accidents. The inclusion of SCBA repairmen on staff facilitates routine maintenance and annual testing of PPE.

With wellness in mind, the department conducts an annual air-consumption drill that involves each member. It also provides access to training programs that are run by an outside specialist, with a focus on exercise and lifestyle changes, including better sleep and eating habits.