Worcester fire officials plan to name a task force to look at firefighter safety after the city's second line-of-duty death in less than a year. 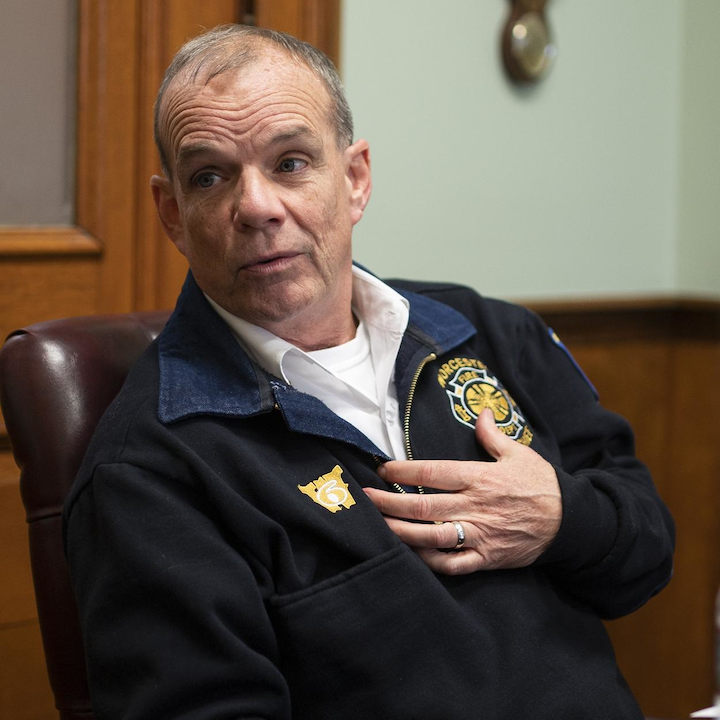 WORCESTER, MA - In view of the Nov. 13 house fire that claimed the life of 39-year-old Lt. Jason Menard, the department's second line-of-duty death in less than a year, City Manager Edward M. Augustus, Jr. Friday announced his intention to name a task force to look at firefighter safety.

The task force will do its work alongside the typically yearlong federal review the National Institute for Occupational Safety & Health conducts as a matter of course after a firefighter dies on duty.

Augustus announced his intentions the same day a strongly worded editorial by Kathy Spencer was published in the Telegram & Gazette. Spencer is the widow of Lt. Thomas Spencer, one of the six city firefighters who died in the Worcester Cold Storage & Warehouse Co. fire on Dec. 3, 1999. She is also the mother of a current Worcester firefighter, Daniel Spencer.

Spencer's piece, among other suggestions, called for better training.

"Blaming triple-deckers or other unique structures is not enough. Firefighter deaths do not happen with such regularity in other cities in the Commonwealth of Massachusetts which have similar multifamily dwellings," she noted in her OpEd piece.

Spencer continued, "Following the warehouse fire, I served on the Abandoned Buildings Committee in Worcester which effected change in how firefighters identify and fight suspected fires in these buildings. No firefighter has been killed since 1999 in an abandoned building, making those changes which were enacted a success."

She called for more collaboration between city departments, similar to what happened as a result of the Abandoned Building committee efforts.

While not placing blame, Spencer said the city needs "to identify and support the clear failures in the system" ... "so that Jon Davies, Chris Roy and Jason Menard's deaths will not be repeated."

There have been nine Worcester line-of-duty deaths since 1999.

Mayor Joseph Petty said he's on the same page with Spencer in regards to seeking answers. "I think the community is asking those questions too," Petty said by phone.

Augustus, in a city hall interview Friday alongside Fire Chief Michael J. Lavoie and two deputy fire chiefs, said the task force was being discussed prior to the emergence of Spencer's letter.

The manager said he wasn't offering a rebuttal to Spencer's letter, as, "We appreciate the spirit with which she wrote that letter and we understand the motivation. We all are asking ourselves the same thing: How do we prevent this from ever happening again? We're exactly on the same page, and so there's nothing to rebut because we're all asking ourselves that. We have the responsibility to do something about it. We're working on a process to try to come up with additional ideas and strategies that can help not have it happen again."

The state is also reviewing the latest deadly fire.

In a statement, State Fire Marshal Peter J. Ostroskey said his office joins the commonwealth and nation in extending its heartfelt condolences to the Menard family, Worcester firefighters, and a city that mourns with them.

"The Department of Fire Services stands ready to assist the Worcester Fire Department with their analysis of this incident and in any other way we can," Ostroskey said. "After every fire tragedy, our agency undertakes a review to see if there are steps we can take to improve safety for residents and firefighters. The Department of Fire Services is reviewing those provisions in the state fire and building codes that apply to the older housing stock in our cities.

The state fire marshal added: "Today's fires burn hotter and faster than the fires of 30 and 40 years ago because of modern furnishings made of foams and plastics. That means occupants have less time to escape and that today's fires may become more dangerous to fight more quickly.

Deputy Chief Martin Dyer suggested that Menard's tragic death draws emotions of everyone, including retirees, family of retirees, and widows of past firefighters.

"Everybody's reacting in their own way to this type of situation, and of course, questions come up," the department spokesman said. "That's what they're going to ask, and we can do nothing but appreciate that because we're experiencing that same exact thing."

"You can never predict what's going to go on in there," he said. "So we are always, after every incident, looking to improve on how that incident went. Not everything is perfect. It's a lot of adjustment as you go along through an incident because situations change. But that is always being reflected back at us, looking at how we can improve any given incident, whether it's a first responder, whether it's a car accident, whether it's anything we go to. A working fire. We're always looking to critique ourselves as a company, as a fire department, as an individual person."

In addition to improving firefighter safety, the task force would look at the code side of how the city inspects buildings, as the two disciplines are related, Augustus said.

About the timeline, and who would serve, Augustus said, "We're still putting together the construct of it but I would think in the next couple of weeks we would have the names, as well as charge - kind of a list of things that we're going to ask them to do and come back with hopefully a fairly quick turnaround, in a couple of months. I would like to get some recommendations back to the extent they may have budget implications.

The city begins to prepare its fiscal 2021 budget in February.

Worcester trains its recruits internally rather than send firefighters to the academy, and while not feeling the need to defend the department's provision of training, Lavoie nonetheless asserted he would "put the Worcester Fire Department up against any fire department in the world as far as training and abilities."

When seeking "Firefighter 1 and Firefighter 2" levels of state certifications that carry various job performance requirements measuring knowledge and skills, Lavoie said that by the time the state comes in to certify Worcester firefighters, they are advanced "so far beyond that, that they have to go backwards to do these tests."

White noted that many of the city's training instructors work second jobs as instructors at the Fire Academy, and as of a couple of years ago, Worcester instructors had more than 130 years of experience.

Also, the state Fire Academy training program is 10 weeks, while Worcester's, which includes a weeklong 02X human performance training component is 16 weeks. The local officials said it is a more comprehensive program that is Worcester specific compared to the academy's more generalized training.

Meanwhile, the fire officials discussed changes that were made in the past year, including the addition of three safety captains, and the implementation of on scene incident safety officers at fires, a change in course that was discussed prior to Roy's death, according to Lavoie.

Essentially, the incident safety officer who arrives on scene with a first alarm carries the sole purpose of looking out for firefighter safety, "to keep our own people safe," Dyer said.

White said that during the fire on Pleasant Street that occurred just hours after the Stockholm Street fire, safety captains noticed smoke pushing out to the sidewalk, indicating a possible basement fire. Everyone was evacuated from the building, and firefighters undertook an exterior attack of the building.

"It's been an excellent program," White said.

Lavoie noted that people often suggest that, because the city has 100-year-old buildings, the department has been fighting fires in those buildings for 100 years.

But, echoing the fire marshal's statement, changes in today's furnishings and what he said was the buttoning up of old buildings, with insulation, siding, and thermal windows add to the challenge.

"Back 15, 20 years ago, when we fought a fire in these buildings, they vented everywhere," the chief said. "The house leaked like a sieve. The windows weren't tight. All the pressure and all the smoke and all of the heat found a way out.

The department is also studying how cold temperatures affect a fire, because all of Worcester's fire fatalities have occurred in cold weather, Lavoie said.