Mourners paid respect for Lubbock Fire Lt. Eric Hill and police officer Nicholas Reyna as they were escorted by first responders on their journey home from Fort Worth. 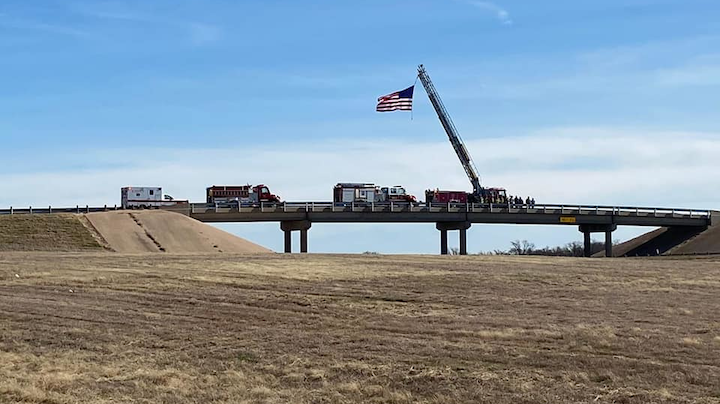 The Lubbock community turned out to pay respects to two fallen first responders when they were returned to the city early Monday evening.

LPD Officer Nicholas Reyna and Lubbock Fire Rescue Lt. Eric Hill got a police and first responder escort back to Lubbock from Fort Worth at 6 p.m. at the Lubbock County Medical Examiner's Office at 4434 South Loop 289, according to LPD public information officer Allison Matherly.

An honor guard was on hand to help mark the occasion. Reyna and Hill had been taken to Tarrant County for an autopsy Sunday.

Officer Reyna's patrol vehicle is on display as a memorial on the sidewalk in front of the Lubbock police station at Texas Avenue and 10th Street.

The police department encouraged community members to visit the memorial and tie flowers to the patrol car.

Hill, 39, and Reyna, 27, both died Saturday morning while responding to a crash in hazardous weather in North Lubbock. Another first responder, 30-year-old firefighter Matt Dawson, was also critically injured during the incident and remains hospitalized. His condition was improving at University Medical Center in Lubbock, according to fire officials.

Funeral arrangements for Hill and Reyna are pending for later in the week.

Lubbock police and fire honor guard members accompanied the first responders on their Hero Walk before they were driven to Fort Worth Sunday morning for an official autopsy, the A-J reported Sunday.

During the drive, state troopers in each county on the way escorted Hill and Reyna.

The crash occurred just after 8:30 a.m. Saturday, when roads were slick from ice and snow from the night before.

According to LPD, they were responding to a single-vehicle rollover on Interstate 27 and Drew Street. While on the scene for that crash, a second vehicle pulling a trailer also wrecked near the scene. Emergency personnel were working on both crashes when a third vehicle crossed into the median and hit Dawson, Hill, and Reyna.

Hill served Lubbock Fire Rescue for ten years and Reyna served with LPD for one year. Dawson has been with the department for five years. GoFundMe campaigns have been created for all of the responders.

GoFundMe pages have been set up in the wake of the accident.