Watch Sarasota firefighters demonstrate how not to deep fry a turkey, as well as give tips on the proper way to cook a bird without burning down the house. 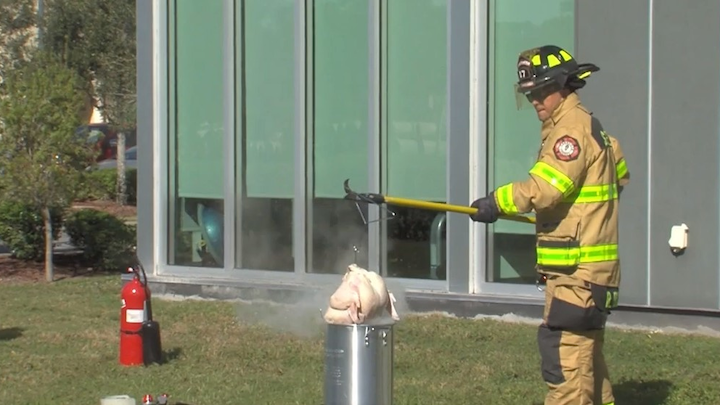 A Sarasota, FL, firefighter demonstrates how not to deep fry a turkey on Thanksgiving.
Suncoast News Network Screen Shot

Many likely will be spending time in the kitchen Thursday preparing Thanksgiving meals.

And with all of the holiday cooking, firefighters tend to see an increase in fires.

According to the National Fire Protection Association, Thanksgiving is the leading day for home cooking fires in the United States.

About 1,600 home cooking fires were reported in the United States on Thanksgiving in 2017. That was a 238% increase from the daily average.

Unattended cooking was the leading cause of these fires, according to the NFPA.

Brooks noted that frying turkeys is popular this time of year. And he urges caution when cooking a turkey this way.

The NFPA cautions that turkey fryers can lead to "severe burns, injuries and property damage." The organization recommends that people purchase deep-fried turkeys from grocery stores or restaurants instead of using turkey fryers at home.