In the aerial footage, firefighters can be seen using ladder-mounted hoses to douse hot spots throughout the under-construction buildings heavily damaged by a massive blaze in Bound Brook. 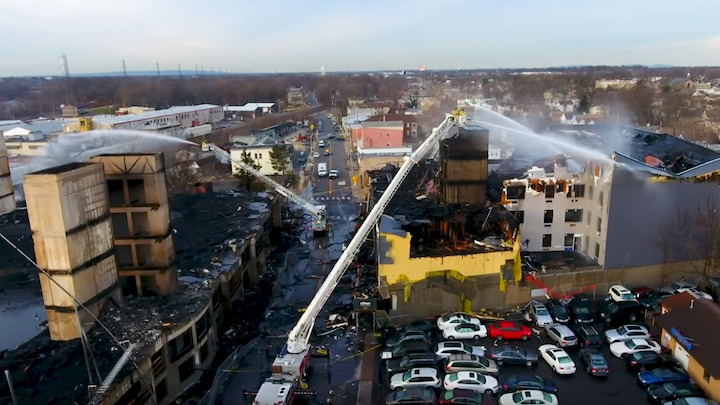 Drone video recorded by NJ Advance Media Monday morning shows the extensive destruction in downtown Bound Brook after a fierce inferno torched a pair of under-construction apartment complexes and nearby buildings as the blaze escalated to seven alarms and forced evacuations.

The footage shows the frames of both multi-story structures still intact, but heavily damaged and covered in piles of burnt debris as firefighters using ladder-mounted hoses continued to pour water on hot spots from above. There is also a large stack of charred material on the perimeter of the buildings, each of which encompasses a block.

The apartment buildings were being built across the street from one another on Main Street near the Bound Brook train station, which remains closed Monday, in the Somerset County borough of about 10,000 people. Both projects will need to be torn down and started over, officials said.

The fire broke out on East Main Street near Mountain Avenue shortly before 8 p.m. Roaring flames spread to both sides of the street. In addition to the construction sites, Bound Brook Police Chief Vito Bet said Sunday the fire spread to two houses and an electronics store.

Gomez said the destroyed Meridia Downtown was separate from a similar project completed several years ago about six blocks away known as the Meridia Main, which was not damaged on Sunday.

Construction on both new complexes began in the spring of 2019, according to Gomez. One firefighter suffered a sprained ankle battling the blaze.