A Critical Incident Stress Management is working with Worcester firefighter to cope with the emotional toll of Lt. Jason Menard's death. 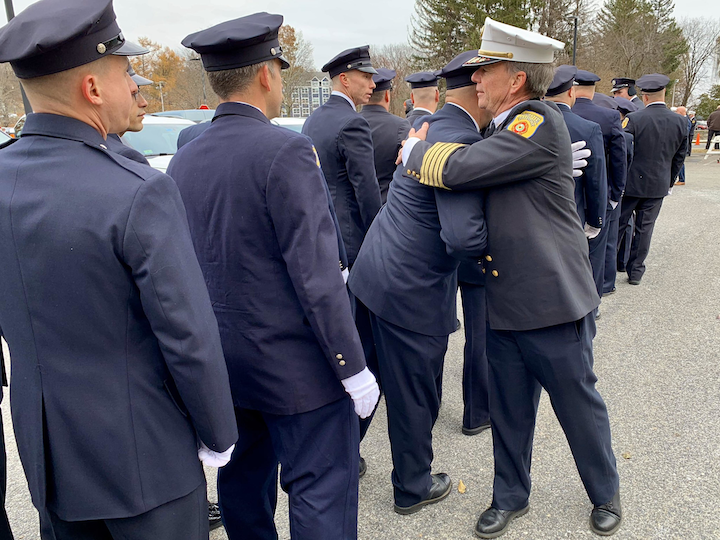 WORCESTER - Helping firefighters cope with the recent line-of-duty death of Lt. Jason Menard began within hours of the Nov. 13 fire, and those efforts will continue, city officials say.

"We're dealing with the emotional toll, and people that need help are getting help," Deputy Chief Martin Dyer, the department spokesman said last week. "We're ready to provide help to those who don't realize they need it yet."

Meanwhile, the cause of the fire remains under investigation.

"We're working on beginning our own internal investigation into the fire, and we're continuing our everyday practice of normal training, normal everyday company drills and answering emergency calls," Dyer said. "None of the normal business stops."

At 3 a.m. that morning, the first CISM team arrived at firefighter headquarters to prepare to meet with each person at the fire scene, said Nicole Valentine, deputy city manager.

"That will continue for months, if not a year," said Valentine, whose husband is a longtime city firefighter. "That whole process is now beginning and the Fire Department knows that it's not just the firefighters who were affected, but it was their family members as well."

Menard's is the department's second line-of-duty death within a year, and ninth in 20 years.

In coping with Menard's death, there will be a range of emotions, the officials said.

First, there are the approximately 75 firefighters who responded, Dyer said.

Then there's the remainder of the department of 400-plus members. While they weren't part of the traumatic event, they do the same job, Dyer said.

"You're losing a friend and a brother, but it brings up memories of your close calls," Dyer said. "Better than anyone else, you can visualize what the injured firefighters and what Lt. Menard were actually going through, and that's another emotional toll that everyone is going through."

It's also fair to suggest there will be guilt, the deputy chief continued.

"Whether it be survivors' guilt, or 'did I do enough,' that's there too," Dyer said, "and we have to overcome that."

Firefighters have already been told that they should understand and recognize that these emotions could be present, if not today, maybe tomorrow or next year.

As the department wants to take its collective grief and energy and put it to positive use, to grow and become a better department, Dyer said it aims to accomplish that by taking care of each other first.

"The starting point is making sure we recognize the trauma and emotions and help anyone who needs help through this," he said.

The department has been "getting out to the guys, trying to build people back up and give them the confident speeches that 'we are a good Fire Department, we can handle this and we handle it every day.' "

The department proved its resilience, Dyer said, when it battled a commercial fire on Pleasant Street hours after the Stockholm Street fire.

"The citizens of Worcester are safer because of the job that we do every day," Dyer said. "We rescue people from building fires every year without fail. In the last couple of years we're talking double digits pulling people out windows over ladders. That's a huge impact."

"There are a lot of people that are alive in the city of Worcester today, and are producing families and adding value to the community because of the efforts of the Worcester Fire Department," Dyer said. "So we just need to remind everyone of that impact of why we come to work every day, and why we accept the certain risks and dangers that are involved in our job, and try to energize around that fact. And then try to energize about the aspects of, is there something we can do better. Be honest with ourselves, and work at that and do that better."

According to Valentine, the Fire Department will provide counseling for firefighters' spouses, significant others and parents who are having trouble coping. Going forward, there will also programs for their children.

Dyer explained that the department aims to be proactive in having its CISM teams talk about the need for loved ones to recognize why someone might be acting a bit different, as a possible warning sign.

"If my wife goes to this session because I ask her to," he said, "she's going to learn of some warning signs she should be looking at in me, even though I'm putting on the strong soldier façade. Maybe these warning signs are really something and maybe you need to step in and try to help me along. That's the kind of stuff we're trying to do."

Other city workers were also affected, Valentine said. Worcester EMS, which she said made an incredible response to the fire, and dispatchers and police officers on scene may also be hurting.

"Going through and seeing the schoolchildren out there," Dyer said. "The different families and businesses. So many businesses that were standing as the procession went out, whether it was three workers or 20 people. That just shows a level of appreciation for what firefighters do. They get it and that energizes you, to send you back to work the next day to do the best job you can possibly do, and provide that community with the service that they have come to know and expect from us."

The turnout of firefighters from across the country and Canada ran Worcester firefighters' gamut of emotions, Dyer said.

"They really know what we're going through," he said. "They understand the job we do. I think that's what drove them to come, to support us and just by being here, it showed support for the Fire Department and it paid tribute to Lt. Menard. It helped bring home the gravity of exactly what happened. It just helps to understand that this was an important person who did an important thing, and it's being remembered and paid tribute in an appropriate manner."

When it was suggested the Fire Department had experienced more than its share of tragedies, Dyer said the department can't dwell on that kind of thinking because it's not productive. Instead, it is focused on the present.

"We have to deal with the emergency calls as they're coming in," he said. "We have to do our jobs. The residents and citizens of Worcester expect it. They deserve it. That's why we're here, and why we all signed up for this job - is to take care of them. And we will do that. And then to put in every mitigation we can for the risks. How can we still do this job effectively and as safely as possible."

Invariably, one will never be able to eliminate the fact that firefighting is an extremely dangerous job, Dyer said.

"The city of Worcester is a fantastic city," he said. "But it has unique fire problems. That is not anybody's fault, other than it's just the way Worcester was developed over the years. Triple-decker housing stock. Demographics. The geography. The hills. Everything just intersects. It makes it a difficult place for a fire. But I have to go back to, what we do every single year: We save residents from house fires all the time. We put out house fires all the time without incident. But sometimes things go bad, and we'll look at those and see what we can do."

Dyer also expressed gratitude to UMass Memorial EMS, which is contracted to provide emergency ambulance service to Worcester, for its efforts on Menard and Firefighter Chris Pace. Menard was credited with saving Pace's life by pushing him out of a third-floor window of the burning building.

"They're coming in on the first alarm before Lt. Menard was in trouble," Dyer said. "UMass EMS was already there as part of that fire response. Right through to the emergency room, where they did heroic work with both Lt. Menard and Firefighter Pace, and now Firefighter Pace is receiving amazing care from the care team at UMass. We could not be more appreciative, but it just shows how everyone comes together, always, and as far as the emotional toll on the city family and UMass, it's absolutely true."