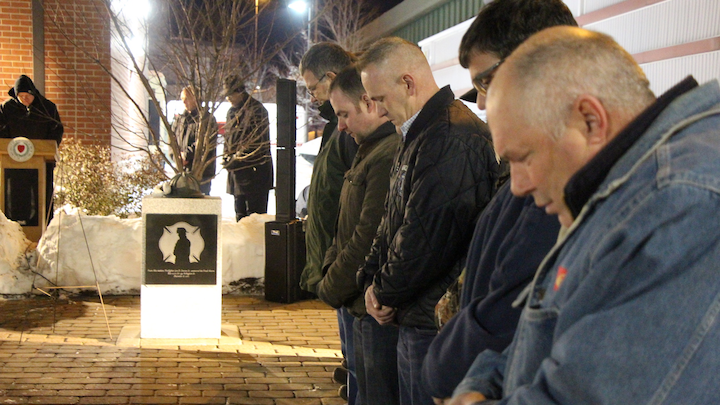 In the cold December air, firefighters and families gathered outside the Franklin Street Fire Station in Worcester to remember firefighter Jon Davies Sr.

Davies’ partner on Rescue 1, firefighter Brian Carroll, was also injured in the blaze as the two men went back into the building to search for people possibly trapped inside.

“This is what we’re here to do, is help,” Worcester Fire Chief Michael Lavoie said during the ceremony. “That’s our job.”

A memorial including Davies’ photo on a plaque and a gold helmet remain outside the fire station. Nearby is the memorial for the Worcester 6, the six Worcester firefighters who died battling the Worcester Cold Storage and Warehouse Co. fire 20 years ago.

Members of Rescue 1 left a wreath at Davies’ memorial during the ceremony.

It was just a few days ago that hundreds of people gathered outside the Franklin Street Fire Station to remember the Worcester 6.

Mayor Joseph Petty thanked everyone who continues to honor the firefighters who died while serving the city.

“It’s been a tough few weeks for the city of Worcester,” Petty said.

Roy died battling a blaze at 5-7 Lowell St. on Dec. 9. He will be remembered at the Webster Square Fire Station at 6 p.m.